It has been awhile since I receive any questions from fellow bloggers that could be answered in a post. I thought that since I am a baby boomer, these questions might make an interesting post. This is what he wrote:

“I’ve seen more than one article regarding baby boomers starting to take mandatory retirement withdraws this year. This is the start of some significant money leaving tax deferred accounts for many years.”

Having worked as a financial advisor, the majority of my clients had little interest in saving for retirement. It was at the bottom of their priority list. It comes to no surprise that nearly half of U.S. families have no retirement account savings at all.

A 2015 Government Accountability Office study found that show that 29% of Americans 55 and older don’t have any retirement nest egg or even a traditional pension plan. Those who do have retirement funds don’t have enough money: 55 to 64-year-olds have an average of $104,000 and those 65 to 74 have $148,000 in savings

Aside from this lone anomaly, we see pretty well-defined growth in average IRA balances as age increases. Pre-retirees generally have well over $100,000 in their IRA, while Americans in the 65-69 age range have over $212,000.

Now these averages are not the most accurate gage because of the amount of wealth held by the super-rich, see the chart below. 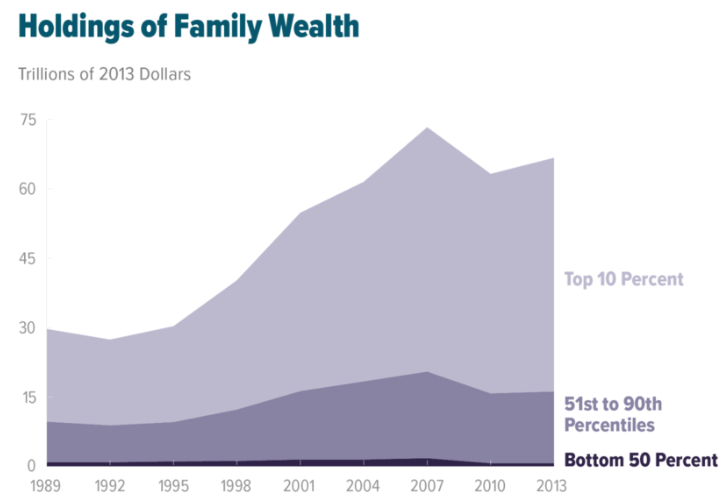 The simple answer to question number 1 is boomer’s mandatory retirement withdrawals should have little effect on asset management companies. In fact, they could be a good long-term investment. One factor that has clause Generation X and millennials to delay purchasing a home was due to the housing crisis, perhaps they will save more for retirement after watching their parents delay or struggle in retirement.

Social Security benefits are much more modest than many people realize; the average Social Security retirement benefit in June 2016 was about $1,350 a month, or a bit over $16,000 a year.

For someone who worked all of his or her adult life at average earnings and retires at age 65 in 2016, Social Security benefits replace about 39 percent of past earnings. For 61 percent of elderly beneficiaries, Social Security provides the majority of their cash income. For 33 percent of them, it provides 90 percent or more of their income.

The answer to question number 2, the majority of retirement funds in North America will be used to cover living expenses.

In my humble opinion, a retirement crisis is coming because we are living longer and saving less. Social Security is funded by two trust funds, one for retiree benefits and one for disability benefits. The 2034 date is the exhaustion date for both funds when combined. But if considered separately, the old-age fund will be exhausted by 2035, after which it would be able to pay just 77% of benefits.

Two ways to get answers to your financial questions: send me an email (ricodilello@rogers.com) or post a comment on my Financial Question and Answer page.