Skip to content
HomeIs Basic Income the answer to a new AI world?

I am so glad that I am a retired senior. I don’t have to worry about a robot taking my job. Since I have lots of time on my hands to think, I wonder what a new AI world would look like. For example; will my 2 year old granddaughter even need to get a driver’s licence? Will the Uber or cab that she orders even come with a driver?

Now I have always been a big fan of science fiction movies. There is a scene in the movie “Logan” where Wolverine has to dodge driver-less trucks to cross the highway to help some people. Installing AI in 16 wheeler trucks could replace the need for a lot of truckers.

Fast food restaurants have been the training ground for teenagers and young adults.  I used to tell my kids that they better get a good education or you will end up using the phrase “would you like fries with that” while working at MacDonald’s. However, even MacDonald’s are installing new self-serve kiosks. Now you can even order your Starbucks coffee using your phone. Where will young people get work experience?

“For example, Australian company Fastbrick Robotics has developed a robot, the Hadrian X, that can lay 1,000 standard bricks in one hour – a task that would take two human bricklayers the better part of a day or longer to complete.”

Japan has the highest percentage of people over the age of 60 and their population is shrinking. As a nation, there is a shortage of workers and they have embraced the use of robots in the work place. This trend could be coming to North America sooner than you think. 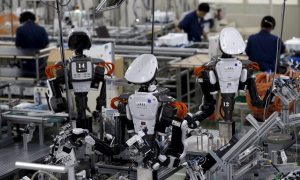 As a baby boomer, I worry about the future cost of health care. The world population is aging and health care costs are raising. I hope that science fiction turns into reality and my caregiver looks something like this.

Why universal basic income may be necessary

A 2013 study by Oxford University’s Carl Frey and Michael Osborne estimates that 47 percent of U.S. jobs will potentially be replaced by robots and automated technology in the next 10 to 20 years. Those individuals working in transportation, logistics, office management and production are likely to be the first to lose their jobs to robots, according to the report.

For many, basic income sounds like a free ride or welfare. Economist believe that masses of people will not just sit at home but will make a contribution by continuing to work. The basic income would allow recipients to explore other options not available to them if they are struggling just to survive,  such as retraining or to find new job opportunities.

In theory, new opportunities would spring up to replace jobs done by machines. However, there are some practical problems, like where will government get the money if less people are working to pay for a basic income program? The North American education system would require a major overhaul to put more job training skills into the curriculum.

Some additional information to consider

The government of Ontario just announced a three year basic income pilot project to help low income earners in three cities. A single person can apply to receive $16,889 a year and couples will receive $24,027. Recipients who are employed will keep what they made from their jobs but their basic income would be reduced by half their earnings. For example, a single person earning $10,000 per year from a part-time job would receive $11,989 in basic income ($16,989 less 50 per cent of their earned income), for a total income of $21,989.

Is basic income just a pipe dream or a future reality?

4 thoughts on “Is Basic Income the answer to a new AI world?”