As a retired senior, I am having difficulty adjusting to ” the Second Machine Age”. The advances in technology are mind blowing. I would never have guessed that self-driving cars in science fiction movies like “Minority Report”  or “I Robot” could become available in my life time.  How about Elon Musk’s vision of offering a rocket ride of only 30 minutes to get to London from L.A., is that just science fiction or a potential reality?

China, the world’s biggest vehicle market, is considering a ban on the production and sale of fossil fuel vehicles in order to reduce pollution and boost the production of electric vehicles. The move would follow a similar ban by France and Britain but they have included a 2040 timeline. However, China has introduced draft regulation to compel vehicle manufacturers to produce more electric vehicles by 2020 through a complex quota system.

Some possible investments to consider

There is little doubt in my mind that advances in digital automation, robotics and artificial intelligence will change your living standards over the next decade. Just think how companies like Facebook, Amazon, Netflix, Google and Apple have already influence our lives during the past decade.

A 2013 study by Oxford University’s Carl Frey and Michael Osborne estimates that 47 percent of U.S. jobs will potentially be replaced by robots and automated technology in the next 10 to 20 years. Those individuals working in transportation, logistics, office management and production are likely to be the first to lose their jobs to robots, according to the report.

Some possible investments to consider to capitalize on this trend

There is also an interesting book that I am thinking about buying. 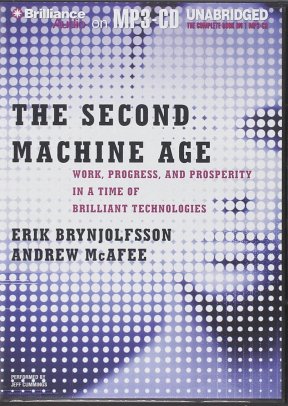 Synopsis: According to the authors, the book has three sections.

You can also search you-tube “The second machine age” to listen to the authors speak.

Disclaimer: Do your own research, these investment ideas can be very volatile.